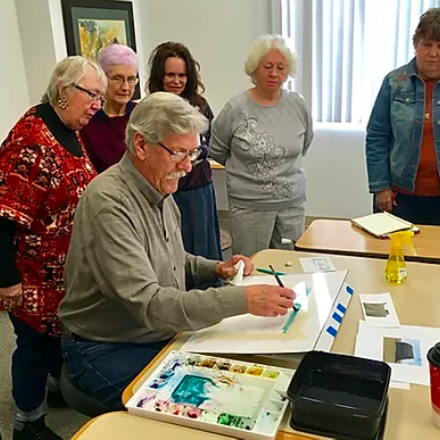 Bill is a South Dakota native living near Deadwood, S.D. He has lived in the western part of the state since he was a second grader. It was then that he learned he could draw. While watching a fellow student sketching on paper, Bill was encouraged to do the same, with some success.

Bill began to study art formally while a student at Black Hills State University in Spearfish, S.D. He earned a B.S. in Fine Arts with a Commercial Art minor. He also earned a double major in Communication Arts. Bill is a signature member of Artists of the Black Hills and Northern Plains Watercolor Society.

A representational artist, Bill uses watercolor paints. On occasion he will use oil paints. He spent the first seven years of life on a farm. That may explain his appetite to depict old barns or houses. Also antique vehicles or fence line seem to grab his attention. Those images bring back fond memories of his childhood. Wondering what, when and who occupied these objects helps Bill create his art. Hopefully, art viewers will be moved and ask the same questions.

​Along with painting, Bill enjoys illustrating. While employed with Homestake Mine in Lead, S.D., he drew for the Safety Department, designed coins, belt buckles and manuals. Bill has illustrated several ground control manuals for mining companies. He has created three book cover designs and illustrated a children’s book.

​Bill has taught a few art classes, preferring to keep the class size small so as to give students ample attention. Lastly, he has been hired to paint several commissions in recent years.