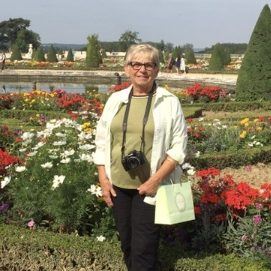 I retired in December, 1998, as microbiology lab supervisor after nearly 30 years at the State Health Laboratory, Pierre. I graduated with a B.S. in clinical laboratory technology in 1964 from SDSU.  My only art experience was drawing sophomore biology plates; however, I have always been crafty and sewed clothes for myself, 2 sons, and husband, often creating my own patterns.

A trip to Maine in 1994, watching artists paint on the Maine coast, inspired me to learn watercolor.  I began with a basic drawing class but did not actually paint until I began monthly classes in the studio of Patricia Johnson, Watertown.  Determined to master the art, I painted on my own and in subsequent workshops with Zoltan Szabo; Susan Luzier; Karlyn Holman; Karen Knutson; Jennifer Stone; Mark Mehaffey; Dale Laitinen; Bob Burridge; Gerald Brommer to name a few.

My first art show was the Spearfish Winter Art Show and Richard Dubois was judge and  I received First Place.  In 2003 I entered the Northern Plains show which was juried and was accepted into the show.  In 2004 I was again juried into the show and received my NPWS signature which was a huge honor for me.  Since then I have only missed 2 or 3 of the annual shows and have received the Silver twice, the Jurors Award,and several Merit and Honorable Mention awards.  The Gold has remained elusive!  I hold this organization in high esteem as it is one of the few transparent watercolor societies in the U.S.

Florals are my art expression and I continue to explore ways to enhance the flowers.  For the past 3 years I have been doing watercolor batik which adapts the traditional batik/wax process to watercolor on special paper.

My other interests include gardening, reading, PEO, wine and travel.  Two highlights of my 20+ years as artist were 2 weeks in France with Patricia Johnson and 2 weeks in Spain with the late Karlyn Holman.